Fear of Mother Earth: Why The Black Woman Must be Destroyed in the System of White Supremacy « diaryofanegress

Posted on November 29, 2012 by Innerstanding Isness

Look at this woman.

She has glowing chocolate skin, a round soft nose, full lips and eyes to die for.

She is pretty? Does she threaten you? Does being in her presence make you, for reasons you cannot explain, uncomfortable? When you gaze at her, do you think she is the epitome of womanliness?

Chances are, if you live in AmeriKlan, the answer is no. This woman is the complete antithesis of everything AmeriKlan stands for. Therefore, she must be mocked, hunted and destroyed.

(As you can see, the hatred of black womanhood was instilled in us from childhood)

The black woman is propagandized to be on the very bottom of the human ladder. Not only is her shade offensive but her genitalia as well. With a naturally curvaceous figure, thick lips and prominent features, she is deemed unworthy of compliments, unworthy of adulation, unworthy of male protection and unworthy of love. Sarah Baartman was a side-show attraction: 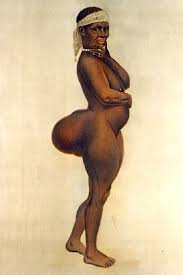 But her “uniqueness” was a source of white envy:

The white man, throughout history, went to the black woman for everything of sustenance and perceived value:

That notion is still not lost on the white mind. With a rapidly decreasing birthrate and a higher incidence of abortion, whites are quickly becoming extinct. Destroying the Earth Mother by getting our own men and women to berate her is a surefire tactic to continue the “Pure White Gene.”

The black woman’s degradation will make her termination not only acceptable but agreeable. A big nose, full lips, kinky/curly hair, which is the opposite of white standards, was made horrific to uphold the white standard of beauty. The destruction of the black female is a very calculated form of psychological warfare. White supremacy thought of the one thing necessary to keep the black family structure together and sought to have it eliminated.

J Edgar Hoover wanted to “prevent the rise of a Black Messiah”:

2. Prevent the RISE OF A “MESSIAH” who could unify, and electrify, the militant black nationalist movement. Malcolm X might have been such a “messiah;” he is the martyr of the movement today. Martin Luther King, Stokely Carmichael and Elijah Muhammed all aspire to this position. Elijah Muhammed is less of a threat because of his age. King could be a very real contender for this position should he abandon his supposed “obedience” to “white, liberal doctrines” (nonviolence) and embrace black nationalism. Carmichael has the necessary charisma to be a real threat in this way.

3. Prevent VIOLENCE on the part of black nationalist groups. This is of primary importance, and is, of course, a goal of our investigative activity; it should also be a goal of the Counterintelligence Program to pinpoint potential troublemakers and neutralize them before they exercise their potential for violence.

4. Prevent militant black nationalist groups and leaders from gaining RESPECTABILITY, by discrediting them to three separate segments of the community. The goal of discrediting black nationalists must be handled tactically in three ways. You must discredit those groups and individuals to, first, the responsible Negro community. Second, they must be discredited to the white community, both the responsible community and to “liberals” who have vestiges of sympathy for militant black nationalist [sic] simply because they are Negroes. Third, these groups must be discredited in the eyes of Negro radicals, the followers of the movement. This last area requires entirely different tactics from the first two. Publicity about violent tendencies and radical statements merely enhances black nationalists to the last group; it adds “respectability” in a different way.

5. A final goal should be to prevent the long-range GROWTH of militant black organizations, especially among youth. Specific tactics to prevent these groups from converting young people must be developed. […]

They knew that black women could be the most dangerous weapon against white supremacy.

As you can surmise, the black female is targeted for extermination and any and all means will be used to bring their diabolical plans to fruition. Please know that numerous black males and females on tel-lie-vision and radio are being paid large sums of money to sell out their own people. Disconnect from the lies being spewed at us and realize that the best kind of warfare is psychological. Whites have not changed their tactics. They have just made them more covert.

Fear of Mother Earth: Why The Black Woman Must be Destroyed in the System of White Supremacy « diaryofanegress.